Why Should Anyone Listen to An Old White Guy? 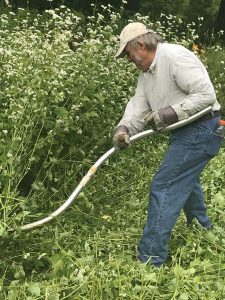 This is a question I’ve thought about a lot lately, because I’ve recently been reminded, by my daughter and one of her two daughters, that it’s much on the mind of younger generations these days. While those two key women in my own life, I have observed, do try to listen to me with a spirit of generosity, I have every reason to ponder their take on folks like me more generally. Why should anyone listen to an old white guy?

Not that I haven’t thought about this before, but now it’s up close and personal. The occasion: I have a new book coming out in the fall of this year. Now in my late eighties, my goal in this book is to be of some help, if I can be, to today’s new generations of church ecoactivists. But as my daughter and granddaughter have been wont to wonder out loud – lovingly, to be sure, but tellingly – what good can come from the likes of me? Three strikes and I’m out, right? Old. White. Guy.

I have found myself in this kind of predicament before. And I survived. That’s somehow reassuring. Beginning in 1968, for reasons that I never fully understood at the time, I found myself as the Chaplain – yes, the male Chaplain – of Wellesley College, an all-women’s institution. That institution was not only peopled by women, it was run by women, for women. On numerous occasions, I would find myself in a room full of them – students, faculty, or staff – with me being the only male present. They would just chatter on, sometimes with two or three speaking at the same time, sometimes discussing the telltale ways of men, as if I weren’t in the room! More by necessity than by wisdom, I soon learned that the best place for me to be during such meetings was in the back of the room and the best thing for me to do would be to keep my mouth shut. Even if I thought I had something to say. Sure, speak if called upon. But that was it.

Twelve years later, I found myself as the Pastor of a small, inner-city congregation in what was then the fourth poorest city in the U.S., Hartford, CT. My understanding in accepting a call to that congregation – affirmed by congregational leaders – was that I was to aspire to be a Pastor for the whole neighborhood, however the Spirit might lead me to do that, not just the Pastor of that congregation. Soon I found myself visiting residents in that neighborhood. Many of them, it turned out, were poor Black women, often living on welfare. In due course, I also found myself head-over-heels involved in fostering a community organization, inspired by the methods of the great Saul Alinsky.

In that process, drawn in by the energies of a young white Irish guy, a trained community organizer, I sometimes would find myself sitting in a living room jammed full of welfare mothers, as I called them in those days, African Americans, most of them, who were by and large unknown in the world I knew best. What did they want to see happen in their neighborhood? that organizer would ask them, emphatically.

Then, typically, the room would erupt in intense conversations, almost, again, as if he and I weren’t there. When the white power structure in Hartford and its suburbs came up, they would roll their eyes in knowing ways that would make me want to go and hide in a corner. Back at Wellesley, I kept my mouth shut in group meetings, because I didn’t really know how to get a word in edgewise. There, in Hartford, I kept my mouth shut, because I had nothing to say. Sure, I would, once again, speak when spoken to. But, again, that was it.

In retrospect, I think that that pattern of default wisdom served me well both at Wellesley and in Hartford. Speak when spoken to. Otherwise, sit in the back of the room and shut up. Often, I should add, both at Wellesley and in Hartford, I was asked to speak at the beginning of meetings, but that was to pray. Still, speaking to God in such situations was a scary business for me, so I kept my prayers short and to the point. Then I would sit down at the back and listen.

Or, stand up and go with them. That was an invitation that kept coming my way both at Wellesley and in Hartford. Student activists wanted me to go with them when they met with the college President to demand that Wellesley recruit more Black students. Welfare mothers in Hartford wanted me to go with them when they stormed into a meeting at City Hall, demanding to be heard. At such times, I often felt like a fifth wheel. But I also felt blessed to be there.

Which brings me to my forthcoming book. As an old white guy, I am indeed something of a fifth wheel. But I feel blessed to be here, with this book in particular. The title sounds ambitious – EcoActivist Testament: Faith Explorations for Fellow Travelers. But what I’ve thought about all the time I was writing the book was this: just in case you ask. Where did that thought come from?

Both at Wellesley and in Hartford, I did a lot of what was called in those days pastoral counseling, mostly with women. But, in retrospect, that enterprise was in fact pastoral listening. When those young women at Wellesley College and those low income African-American mothers spoke to me one-on-one, whether in college dormitories or in inner-city apartments, I typically stood in awe of them. Early on and then consistently thereafter, I learned that the phrases “a strong woman” and, all the more so, “a strong Black woman” are more often than not redundant. Their stories often were powerful. Only rarely would I speak, in those one-to-one personal explorations. Occasionally, to be sure, one of them would ask me – “And what do you think?” I would then tell them, briefly.

I feel the same way about my forthcoming book, EcoActivist Testament. Yes, I’ve written it for new generations of ecoactivists, whose amazing commitments and whose strong and often, to me, complex ways of engaging issues I may only dimly understand. But I have written the book from the back of the room, as it were – as an old, white, guy who’s been working with these issues since before the first Earth Day – just in case somebody should ask me: “and what do you think?”

Along the way, moreover, and for me, all the more importantly, I’ve tried to be as supportive as I can of an extraordinary grassroots church movement, run by energetic and visionary ecoactivists, many of them women, most of them much younger than I, all of them deeply committed to the struggle for global ecojustice. As Lutherans Restoring Creation (see their excellent website: lutheransrestoringcreation.org) thankfully continues to flourish, I am delighted to hang out now and again with some LRC activists, mostly these days via Zoom – not primarily to speak, but mainly to listen to them as best I can and then to give money as generously as I can.

The latter might indeed be the most important thing an old white guy like me can do in these times of global crisis. Never mind whether anyone will be listening to anything I might be inclined to say, should anyone ask me what I think. Never mind writing books, in particular, even though that’s one of the things I have long felt called to do. First and foremost, let my checkbook do the talking. That’s the least, I believe, and perhaps the best, that an old white guy like me can do. Thank you for listening.

Share this…
2022-05-06
Previous Post: The Shelf-Life of a Vision, Almost 30 Years Later: the 1993 Statement on Caring for Creation by the Evangelical Lutheran Church in America
Next Post:  J.M.W. Turner’s Slave Ship, Nature, and Having Eyes to See