Cutting Through the Ice to Contemplate the Depths 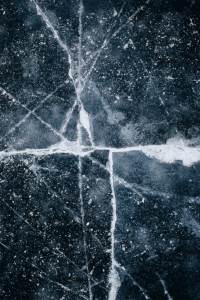 Late in the fall, my wife and I typically shut down our old Maine farmhouse in the eastern foothills of the White Mountains.  We’re not skiers, but even if we were it would be folly for us to keep water in the pipes of our porous 19th century house during the bitter winter months.  We once rented out the place for the winter, and the pipes froze all the time, even with the furnace on and the wood stove blazing.  Still, two or three times during the winter months we do travel up to that frigid house for a couple of days.  Sometimes I wonder why.

It’s all the more puzzling when I reflect about what we have to do in order to travel there and what we have to do while we’re there, simply to maintain ourselves.  Our Prius barely handles the up and down rural roads, covered as they often are with snow and ice.  Once we arrive, I have to chop our way some twenty feet to the front door through iced-over drifts.  Then we lug in not only our modest provisions, but a dozen gallons of water for drinking and cooking.  As soon as possible, we begin to burn precious stacks of firewood lavishly in our Franklin Stove, around which we huddle.  First thing the next morning, it’s time for me to cut a hole in the ice out back.

We have to use the toilet while we’re there, of course, but there’s no way to flush it during the winter.  To address that challenge, I put on my boots, grab hold of a long-handled, flat-edged spade, a small pitcher, and a couple of buckets.  I then crunch my way through the deep snow behind the house for a hundred feet or so to a tiny stream that’s totally covered by high drifts.  Precariously, I inch my way down the almost indiscernible bank of that stream to the underlying ice, maybe two or three inches thick.  Once balanced, I use my spade as an icepick to chop a foot square opening.  Then I hunker down over that opening, and contemplate the water that flows there, maybe eight inches deep, moving along even when the temperature has dropped below zero.  It must be a comic apparition, were anyone to witness it.  There I hover, pitcher in hand, the wind-chill raging around me, bailing out water from beneath the ice, in order to fill the two buckets I’ve brought with me.

Witness me, then, cautiously carrying a single bucket of nearly frozen water through the snowpack to the back door of our house.  Then I repeat the process.  Once, by the time I arrived at the house with the second bucket, a skin of new ice had already formed on the first bucket.  Even when the sun might be beaming down, the ferocious winter temperatures rule the day, and permeate my hands through my double-lined gloves.  All this, so that we can flush the toilet when we need to.

But why?  Why not remain at home in our well-heated condominium in the Boston area and warmly continue to embrace our comfortable, retired existence?  Why push ourselves, in this way, to confront the elements?

One of the factors, on my part, could be my years.  Past eighty now, am I secretly regarding myself as some kind of wilderness warrior?  Is this an old-age rite or even some masculine thing, to show myself that “I can still do it”?  But I think it’s more than stereotypical posturing.

Could the real lure of this adventure, for me at least, be that experience of chopping through the ice and seeing the moving water underneath?  What do I see?  Even though the stream is only eight inches deep, I’m overcome by an experience of what Paul Tillich called “the dimension of depth.”  I took courses with Tillich when I was an undergraduate and beyond, and his voice haunts me to this day.

My God!  In chilling midwinter, underneath all those drifts and thick ice, reality is moving.  It’s flowing.  It’s going somewhere.  We don’t live entombed in a world destined for nothing but ice, at the cosmic end of all things.  Underneath it all, Being is Becoming, not Stasis.

Granted, this particular encounter with the Depths of Being and Becoming is only twelve inches square and eight inches deep.  But it’s a revelation for me when I chop through to the ice, under those arctic conditions, to discover that flowing water.  To some passerby, it might look odd.  It feels odd.  Still, I now regard myself, when I stand there, as contemplating the Depths.

I have only lately come to that possibly comical spiritual conclusion.

Recently on a family outing to celebrate my daughter-in-law’s graduation from a master’s program at Dartmouth College, I was able to find occasion to wander through that institution’s art museum.  There I encountered, for the first time, works by the contemporary Finish-American painter, Eric Aho.  Many of his striking abstract impressionistic works depict three-by-four foot squares cut through eight-inch ice toward the edge of a sizeable, snow-covered stream.  The explanation:  those squares in the river ice depict an opening into which someone who has just come from the sauna can plunge.

The curator of that exhibit just didn’t get it.  She interpreted those paintings in terms of lines, colors, shapes, and contrasts.  “Aho intuitively understood the hole as an abstract motif,” she wrote in the visitor’s guide.  “The depth of the ice, the light of the day, the reflectivity or opaqueness of the water, the snow accumulating around the opening, and the angle of the view on the ice cut – all of these elements differentiate the paintings in terms of subject.”

I saw much more. Most of the icy water squares in this exhibit were dark, although one was a bright yellow, as if reflecting sunlight.  I found this series of water-squares in the river ice powerful, even overwhelming, a testimony to ultimate meanings, to Darkness and Light.  In this respect, I think, I remain a student of Tillich.

Tillich would have celebrated those paintings, much more insightfully than the curator of that exhibit did.  For Tillich, there was a darkness, a mystery, even a dangerous character, to our world:  Being and Becoming threatened by Non-Being, yet not without moments of mystical elation.  Tillich believed – and often demonstrated – that art can reveal those dynamics, that art more generally is a matter of what he called “ultimate concern,” not just a matter of images, colors, contrasts, and lines, however striking they might be configured in any given work of art.

Especially these paintings!  The curator made nothing of the sauna experience, presupposed by the artist.  Don’t these paintings suggest death and resurrection?  Even Baptism?  If they’re not intended to recall dying and rising with Christ, surely they suggest some kind of primal death and rebirth from the womb of the Depths.

I have concluded that that’s the vision that claims me, as I chop through that thick ice on that little stream behind our Maine house.  It’s a matter of ultimate concern. That’s the underlying reason, doubtless among others, I have decided, why I keep wanting us to undertake those winter excursions, so that I can cut through that ice to contemplate those Depths, comically perhaps, but powerfully for me.

*  “After running out of the hot sauna, your naked body steaming in the below zero weather, only your feet covered by socks to keep your feet from sticking to the ice, you jump into the hole in the ice (don’t think about it – just do it – thinking is a problem at that point), dip under the water surface two or three times and then climb up the wood ladder leaning against the far edge of the rectangular hole.  You always do this in pairs so another set of hands is there to grab you and pull you out in case you panic or somehow end up under the ice.  Alas, because of my stents I no longer can do this.  Now I tend the fire, sit in the sauna, but can only go out and stand on the small deck of the sauna and let my body steam away the heat until I am cool enough to head back into the sauna again.  You actually don’t feel cold when you go into the water – just your body feeling pin prickles and the sucking sound as you try to breathe as you dip under the surface of the water.” — David Gagne via private communication, February 20, 2016