My own book, Before Nature:  A Christian Spirituality, is about – nature.  But not just nature.  It’s also a narrative of my own struggle to believe.  In Before Nature, I regularly refer to “the fragile faith” that I’m recommending.  For me, nothing’s certain in the world of faith.  I point to Martin Luther’s image of the believer as one who, while blindfolded, takes the hand of a guide, in order to cross a high and narrow bridge. 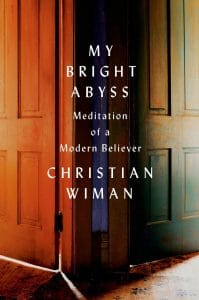 In this respect, I have lately found a soul-mate in Christian Wiman, as he gives an account of his own fragile faith in his scintillating and sometimes painfully narrated testament, My Bright Abyss:  Meditation of a Modern Believer (New York:  Farar, Straus and Giroux, 2013).

The struggle to believe that I narrate in Before Nature, however, is the struggle of a “once born soul” (William James).  Hard pressed by what I understand to be “the eclipse of God” in our times, in my narrative I attempt to make some sense of the faith that has been handed down to me, particularly in the Church’s liturgy, which has always been a given in my life.

Wiman, in contrast, struggles to make some sense of the faith that he’s seeking to claim for the first time.  In this sense, he’s a “twice born soul” (again, William James).  True, raised a Baptist in rural Texas, he did have a “born again” experience as a boy.  But then he left that experience behind as he became a kind of spiritual secularist (my term) for much of his adult life, one who also, along the way, developed a deep passion for poetry and who somehow discovered that he had a calling to be a poet.

My Bright Abyss tells the story about how in the midst of his spiritual secularism – and his successful career as a poet and contributor to publications like The New Yorker – Wiman was led to an overwhelming encounter with the crucified and risen Christ, yet without leaving his spiritual secularism behind.  I recommend this elegantly written book.  It tells a spiritual story that resonates deeply in my once-born soul.

Here are some quotes from Wiman’s moving narrative, made all the more poignant by his account, along the way, of his struggle with a life-threatening illness.

“To admit that there may be some psychological need informing your return to faith does not preclude or diminish the spiritual imperative, any more than acknowledging the chemical aspects of sexual attraction lessens the mystery of enduring human love.  Faith cannot save you from the claims of reason, except insofar as it preserves and protects that wonderful, terrible time when reason, if only for a moment, lost its claim on you.” (7)

“I can see how deeply God’s absence affected my unconscious life, how under me always there was this long fall that pride and fear and self-love at once protected me from and subjected me to.  Was the fall into belief or into unbelief?  Both.  For if grace woke me to God’s presence in the world and in my heart, it also woke me to his absence.  I never truly felt the pain of unbelief until I began to believe.” (12)

“Christ speaks in stories as a way of preparing his followers to stake their lives on a story, because existence is not a puzzle to be solved, but a narrative to be inherited and undergone and transformed person by person.  He uses metaphors because something essential about the nature of reality – its mercurial solidity, its mathematical mystery and sacred plainness – is disclosed within them.” (90)

“The distance between culture and Christ seems like a modern phenomenon, but I think it’s probably always been the case.  Even when Christianity is the default mode of a society, Christ is not.  There is always some leap into what looks like absurdity, and there is always, for the one who makes that leap, some cost.” (91)

“Modern spiritual consciousness is predicated upon the fact that God is gone, and spiritual experience, for many of us, amounts mostly to an essential, deeply felt and necessary, but ultimately inchoate and transitory feeling of oneness or unity with existence.  It is mystical and valuable, but distant.  Christ, though, is a shard of glass in your gut.  Christ is God crying I am here, and here not only in what exalts and completes and uplifts you, but here in what appalls, offends, and degrades you, here in what activates and exacerbates all that you would call not-God.  To walk through the fog of God toward the clarity of Christ is difficult because of how unlovely, how ‘ungodly’ that clarity often turns out to be.” (121)

“It is the absoluteness of meaninglessness that Christianity, as I understand it, inhabits and inflects, the shock and stark violence of the cross that discloses the living Christ.  Revelation, like creation, arises not merely out of nothingness but by means of it.” (136)

“Sometimes it seems that I can happily hold all Christian tenets in an active abeyance, a fusion of faith and skepticism that includes and transcends literal and figurative truths, if I can hold fast to one indestructible fact (fact!?):  Christ’s resurrection.  This event answers every impulse, fear, and need of my imagination, quiets and clarifies the raucous onslaught of time, suffers me – the mute, destitute, unselfed seed of being that is most me – to understand what suffering is, and what it means.  But no.  The reality wavers, the image fades like a reflection in the water, for under every assertion about God, including the one I am making at this very minute, the ground gives way, and once again I am left with the vital and futile truth that to live in faith is to live like the Jesus lizard, quick and nimble on the water into which a moment’s pause would make it sink.” (164)

“The problem with so much thinking about Christ’s resurrection and the promise that lies therein is the self-concern that is attendant upon, and often driving, this thought:  resurrection matters because we matter, our individual selves; it matters because it is for us.  But Christ’s death and resurrection ought to be a means of freeing us from precisely this kind of thinking, this notion of, and regard for, the self, which is the source of so much of our suffering and unhappiness.”  (167)