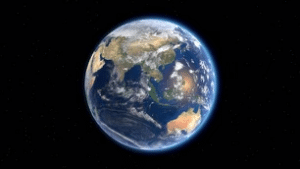 For me, April 22, 2020 was not just the celebration of the first Earth Day fifty years ago, it also was a more parochial time to begin some ruminating. I published my first book in ecological theology the same year as the first Earth Day – Brother Earth: Nature, God, and Ecology in a Time of Crisis (New York: Thomas Nelson, 1970). Fifty years ago! In those days, mine was one of a very few voices addressing ecological issues theologically.

I had to struggle even to come up with a title for the book. My first impulse had been to think in terms of “Mother Earth.” But in those days many Christians – who were then as now my target audience – were highly suspicious of anything that sounded like “paganism” or “nature religion.” Those were the days, too, when numerous American Christian thinkers were, following the great Karl Barth, zealously opposed any theology of “natural revelation.” On the other hand, American Christians – especially American Protestants! – had never wavered in their adulation for the great Catholic saint, Francis of Assisi. And, privately and zealously, if not publicly, I wanted to claim Francis as my own patron saint, as I was seeking to identify a new kind of Christian love for nature. So Brother Earth is was. 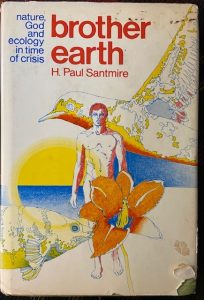 To be sure, I would later come to publicly express some regret for that choice. The year 1970 also marked, for me, the beginning of a new kind of vocational adventure. I had just begun my ministry as Wellesley College’s first Chaplain. Back then, not only was that a women’s college, women ran the place! It was a women’s world. I soon realized that if I were to survive, never mind thrive, in that world as a male ecological theologian, I would have to become a champion of a new form of Christian theology that was emerging in those days, ecofeminism. So I invited Mary Daly, author of the then notorious Beyond God the Father, to speak in the College Chapel. She would be the first of countless other feminist preachers, whom I would bring to Wellesley. And, in due course, I began to teach a course in ecological theology at the College, highlighting the works of ecofeminist thinkers like Daly and Rosemary Radford Ruether. In retrospect – so I came to believe in ensuing years – I could well have entitled my first book Mother Earth or even Sister Earth. But publishing, like politics, has always been the art of the possible. Given the patriarchal propensities of American church life in the nineteen-seventies, I probably had done very well, indeed, with the title Brother Earth. At least it had been a step in the right direction.

Be that as it may, since the publication of Brother Earth in 1970, in addition to many other things both personal and professional, I devoted myself to ecological theology and ecojustice activism with what some might think of as a fixation. It has surely been a lifelong passion, predicated on an increasingly urgent anxiety. Not for nothing did the word “crisis” appear in the title of many of my books.

On April 22, 2020, as I now reflect about the last fifty years, I am sheltering in place, a good thing for an octogenarian like me to do in this era of the corona pandemic. In my view, this enormous scourge may well be just the first wave of a number of global disasters that may be about to afflict God’s good earth in the years and decades to come, especially the poor. What will the next fifty years be like for humankind on this planet? I have hope, theologically, but I am not optimistic, existentially. Still, I stand, as ever, with Martin Luther, who, when he was once was asked what he would do if the world were about to come to an end, offered these, by now oft-quoted, words, “I would plant an apple tree.”

Which I take to mean: whatever else all of us may be called upon to do in this era of global crisis – who knows what horrific challenges may await humans during the next fifty years – we all should do the good that each of us has been called upon to do, without ceasing. For me, much of my time over the last fifty years has been given to cultivating the field of ecological and ecojustice theology. In retrospect, I can see that much if not all of those labors were parochial – and still are. I’ve acted and written self-consciously and publicly as a card-carrying Christian and as a Lutheran Christian in particular, who has aspired to be a public, ecumenical theologian.

My major studies are listed elsewhere on this website. Many of them are relatively well-known and at least a couple of them, such as my historical study of Christian attitudes to nature, The Travail of Nature: The Ambiguous Ecological Promise of Christian Theology (Minneapolis: Fortress, 1985), are well-regarded. Lesser known, but to me perhaps my most important theological work, have been my efforts to influence the thought and practice of my own particular Christian communion, American Lutheranism. I have long claimed the sentiments that I was taught by a community organizer in mid-life as a maxim, when I was pastoring a small congregation in inner-city Hartford, CT: grow where you are planted. That field, for me, has been the life and faith of the Lutheran tradition, understood as a reform movement within the Holy Catholic Church.

Thus I had a hand in shaping major statements on the environment by the Lutheran Church in America (1972) and the Evangelical Lutheran Church in America (1993) and I continue to serve as a consultant for the struggling, but visionary grassroots movement, Lutherans Restoring Creation (see lutheransrestoringcreation.org). My most recent book, written in the wake of Pope Francis’ amazing encyclical, Laudato si’, invites readers to take one step backward, in order to take two steps forward. That one step backward is a review of some of the comprehensive contributions of American Lutherans to ecological theology and ecoethics over the past fifty years – Celebrating Nature by Faith: Studies in Reformation Theology in an Era of Global Emergency (Eugene, OR: Cascade, forthcoming).

I wrote Brother Earth, fifty years ago, in part to respond to the then increasingly popular 1966 claim of the historian Lynn White, Jr. that Christianity as a faith tradition had been, for the most part, ecologically bankrupt (!). I then argued, in many other writings as well, especially in my 1985 historical study, The Travail of Nature, that White’s thesis was an important half-truth. Yes, we must be well-aware of how Christianity has been complicit over the centuries in cultural trends that have led to the abuse and the degradation of nature and the poor of the earth. But that’s not the whole story, by any means. Historic Christianity has also championed a second – ecological! – tradition. Hence my chief vocation as a one who has aspired to be a public theologian of the Holy Catholic Church: to identify, to reformulate, and then to champion that rich ecological tradition of Christian life and thought, most recently highlighting the ecological witness of American Lutheran theologians and practitioners during the decades since 1970.

As of April 22, 2020, then, as I shelter at home, I am grateful that I have been given my longstanding vocation to serve as an ecological theologian rooted in Lutheran traditions, among a now global ecumenical community of theologians and practitioners, led by His Holiness, Pope Francis, all of whom are committed to the life and the mission of the Holy Catholic Church and, in particular, to its ecological and ecojustice witness in this, our apocalyptic era.